Definition 2: $e(X)∈\mathbb{R}$ is a sentence in $ML(\mathcal{L})$ if it consists of any possible consecutive operations in $\mathcal{L}$, operating on a given matrix $X$ and resulting in a scalar value.

Matrix operation can extract different features from the graph that can be used to differentiate the graph.

How powerful are GNNs?

Theorem 2: Chebnet (Spectral GNN) is more powerful than the 1-WL test if the Laplacian maximum eigenvalues of the non-regular graphs to be compared are not the same.

Theorem 4: Triangle and 4-cycle graphlets can be counted by sentences $L_2^+$

Theorem 5: Tailed triangle graphlets can be counted by sentences $L_3^+$

Generalization of Spectral and Spatial GNN

As aforementioned, the K-WL test can be represented by some matrix operations. Thus, the GNN contains the certain operations can also have the express power of k-WL test.

The paper proposes two methods. The first one, called GNNML1 is shown to be as powerful as the 1-WL test. The second one, called GNNML3 exploits the theoretical results of to break the limits of 1-WL and reach 3-WL equivalence experimentally. 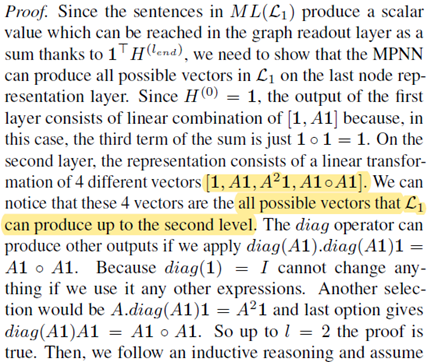 To reach more powerful models than 1-WL, the graph convolution must support trace ($tr$) and multiplication ($⊙$) operation in $L_3$.

However, we cannot initially know which power of adjacency matrix is necessary for a given problem.

Thus paper designs a spectral convolution support that can be expressed as a linear combination of all powers of adjacency matrix. 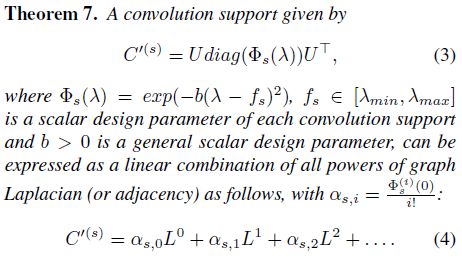 With the any power of the adjacency matrix, the trace ($tr$) and multiplication ($⊙$) operation can be approximated by MLP (A trick ! MLP can approximate every function~)

Where M can be seen as a mask (attention matrix) to select certain powers of the adjacency matrix.

The forward calculation of GNNML3 is :

Where $C^s$ can be seen as a multi-heads attention of different graph structure components to provide different operations’ result vector that can be used to approximate 3-WL test.

Q1: How many pairs of non-isomorphic simple graphs that are either 1-WL or 3-WL equivalent are not distinguished by the models? 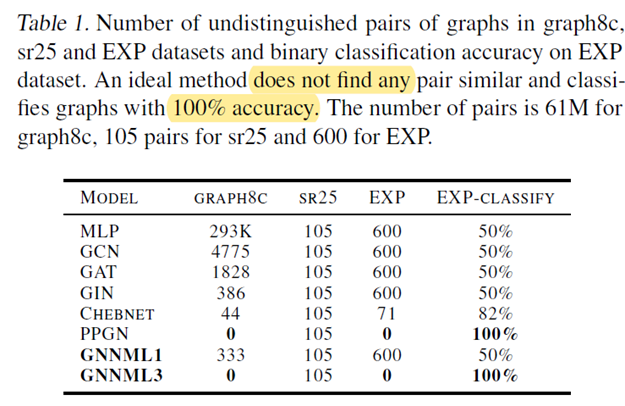 Q2: Can the models generalize the counting of some substructures in a given graph? 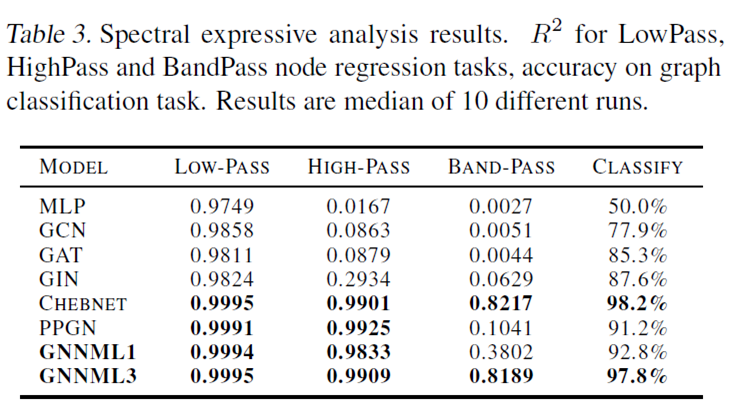 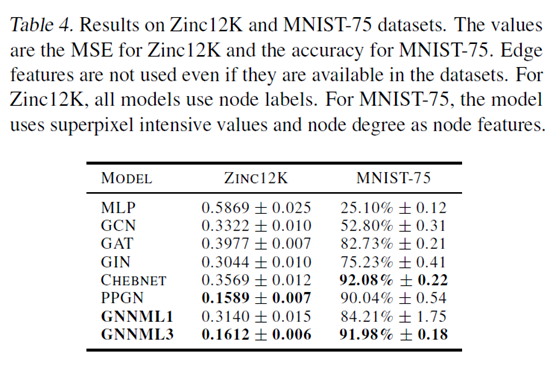